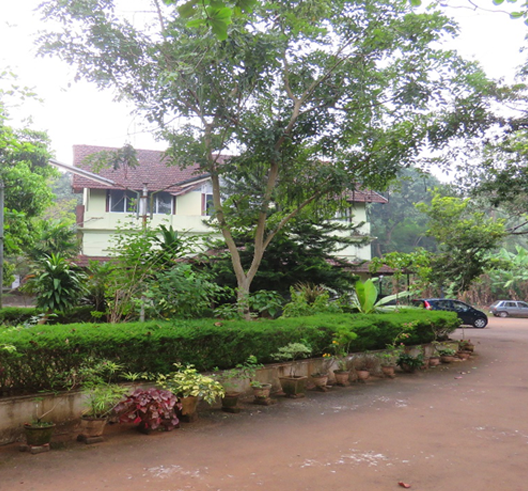 Government Mental Health Centre, Kozhikode right from its inception in the  colonial period in 1872 is committed to the promotion of mental health and has a legacy of  150 years of devotion towards the mentally ill. GMHC is one of the 3 speciality hospitals in psychiatry under the   Ministry of Health and Family Welfare, Government of Kerala. Situated in the heart of Kozhikode city at Kuthiravattom, the hospital is easily accessible for the public by road and rail. The campus is spread across 22 acres of land and houses 9 wards, pay ward, de-addiction ward, administrative building and other infrastructure facilities with  ample space for outdoor recreation for the patients. The heritage building that has stood the test of time and the lush greenery makes the campus unique.

The bed strength of the hospital is 474 and on an average 3000 patients are treated every month as outpatients. The hospital works round the clock with 24 hours admission and emergency services. The hospital under the able and proactive leadership of its current Superintendent Dr. N. Rajendran and an excellent multidisciplinary team of Psychiatrists , doctors from other specialities, Clinical Psychologists , Psychiatric Social workers and nursing staff along with other supportive staff provides all modern treatment facilities for patients such as Modified ECT , Oral Ketamine Therapy, Biofeedback Therapy , Play Therapy etc. District Mental Health Programme provides community mental health services . GMHC is affiliated to the National Board of Examinations and runs the DNB Programme in Psychiatry and also provides academic training for Students of Medicine, Nursing, Clinical Psychology , Social Work and Pharmacy. The hospital works in close co-operation with the District Administration, Social Justice Department Govt. Medical College, IMHANS, District Legal Services Authority , Various PsychoSocial Rehabilitation Centres , Volunteers and Wellwishers and works not only towards the treatment of mentally illness but towards the promotion of mental health inorder to facilitate every human being to live their life to the fullest extent.

Government Mental Health Centre, Kuthiravattom, Kozhikode was established in 1872 by the erstwhile Madras Presidency. It was then known as  Lunatic Asylum of Calicut. Today, GMHC has completed 147 glorious years of dedicated service in the field of mental health. The lunatic asylum in the colonial times initially admitted insane from the army. Later on civilians and non English patients were also admitted .It  was under the Jail department in the pre independent India and was referred to as lunatic jail by the people. It continued to be under the jail department for 2 more years even after independence and Jail IG was in charge of the hospital . It was in 1950 that the hospital was transferred under the Department of Health.  As per the annual reports of various years preserved in the archives department, doctors and nursing staff continued to be English until 1912 and there were separate facilities for native and British Patients. The term lunatic asylum was changed to hospital world wide from 1920s onwards. Even in the colonial period patients were actively engaged in several rehabilitation programmes. Weaving and stitching were practised in 1941 and clothings for the 500 patients were manufactured within the hospital.

The 147 years long journey of growth  of GMHC is marked by several milestones in the areas of infrastructure  and service delivery. Starting with 9 patients in 1872, hospital was equipped to accommodate 84 patients in 1986 and patient strength of the hospital steadily increased to 350 in 1935 and 500 in 1940 and 700 in 1970 and 800 in 1990.  The year 1955 was marked with the electrification of the hospital . The first qualified psychiatrist was Dr Santhakumar who was appointed in 1962. He was succeeded by Dr Vijayan, Dr. K.R. Balakrishnan,Dr.Gopalakrishnan, Dr.Madhavadas, Dr.Mukundan, Dr. R.L. Saritha, Dr. Ravikumar, Dr. N. Rajendran  and Dr K.C. Remasan who is the current Superintendent who assumed office from 2018 onwards. The pay ward was erected in 1967 and in the year 1972 , the hospital observed the centenary year under the leadership of celebrated freedom fighter K.P.Kesava Mennon . In 1983, IMHANS was founded by Dr. Santhakumar  as part of community psychiatry and rehabilitation of the patients. Printing units, book binding units and cover making units functioned in the campus. IMHANS became an independent establishment later on but they continued the OP services at GMHC . Department of psychiatry from Govt. Medical College , Calicut also provided OP Services at GMHC. The services of IMHANS was completely withdrawn from GMHC in 2010  though there exists now a collaboration between the two institutions at academic level. The services of the Department of Psychiatry of Govt. Medical College also was withdrawn in the year 2010 but reinstated from 2014 onwards.

In 1987, male pavilion blocks were inaugurated by the then Chief Minister Sri. E.K. Nayanar. In 2004, the main gate of the hospital was reconstructed under the leadership of then MLA, Late Mr. Sujanapal which played a key role in changing the public’s perception  about the hospital. In 2013, the de-addiction ward named Mochanam started functioning. and in 2017 the District Mental Health Programme came under GMHC, Kozhikode. ECT(Electro Convulsive Therapy) restarted after a period of 15 years with state of the art Modified ECT machine.

Biofeedback  machine was installed in 2019 in the Department of Clinical Psychology along with a play therapy room.  The hospital ventured into academic initiatives and the application to accredit the hospital with National Board of Examinations was submitted in the year 2018 under the leadership of the then Superintendent Dr.N. Rajendran and the inspection  was carried out and accreditation was granted and the DNB course in Psychiatry was started under the leadership of the succeeding Superintendent Dr. K. C. Remasan in the year 2019 with Dr Rajin T.K as Nodal officer . Currently NBE has sanctioned 2 seats for DNB in Psychiatry and academic programme is carried out in collaboration with the  Govt. Medical College, Kozhikode and IMHANS. The Scientific Research Committee for the purpose of research was established in 2019 in connection with the DNB Programme. GMHC Kozhikode conducted the first State level CME - AUGMENT-2019 on 8th December , 2019 with a participation of more than 100 persons from various branches of Psychiatry.

This hospital  with a bed strength of 474 is now serving patients from 6 northern districts of Kerala and also from the neighboring states . The institution has an excellent team of  22 doctors including administrative authorities. 12 Psychiatrists and 4 clinical psychologists, 2 psychiatric social workers along with nursing staff and occupational therapist renders quality patient care at GMHC. The Hospital Monitoring Committee under the District Judge conduct the monthly review meetings and and Hospital Development Committee under the District Collector  addresses the developmental issues of the hospital and offers immediate remedy. As the increase in the number of patients against the sanctioned strength of 474 was severely affecting the quality of services for the patients, a Discharge Adalat was initiated in 2015 under the initiative of the then Superintendent Dr. N. Rajendran. The Discharge adalat was conducted on every Fridays in all wards on rotation to discuss about the possibilities of  discharging the patients who were fit for discharge. The adalat team consisted of the superintendent, unit doctors, nurses of the ward, psychiatric social workers and representatives of district administration, court, police and jail authorities. Accordingly the patient discharges were facilitated at large scale and the patient strength was drastically reduced.

The Govt of Kerala had  decided in  to proceed with a Master Plan to raise GMHC to global standards as INSTITUTE OF MENTAL HEALTH KOZHIKODE. and an estimate of Rs400 crores is anticipated for the completion .First propoal was prepared  in 2011 under the initiative of the then Superintendent Dr Mukundan.  A Project Report  was submitted under the leadership of Dr.K.K.Sivadasan initially.  For the implementation of the master plan a trust was formed namely, Institute of Mental Health Trust and it is  registered with District Collector as chairman ,Superintendent as Secretary ,Medical College Superintendent as Treasurer, Government Nominees  and District Medical Officer as the members.The District Collectors and former Superintendent Dr,K.Rajendran took a proactive role in the advancement of the Master Plan. A Detailed Project Report by the selected agency for an estimate of Rupees 100 crores for the first phase of the work was submitted to the government under the leadership of  Superintendent Dr.K.C.Remasan . Development has no limits. It is hoped that the master plan will change the face of GMHC and the hospital will continue to serve the mentally ill with a new face and more zest.